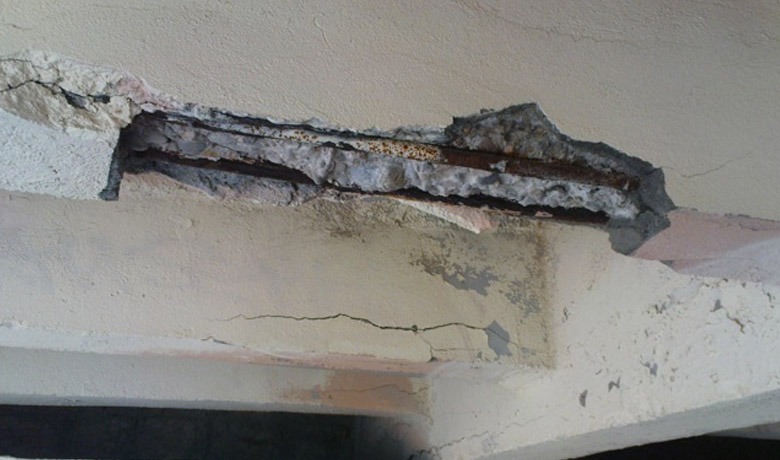 Causes and Implications of Concrete Deterioration

Swimming pools and coastal structures are exposed to corrosive chloride salts. Cyclic wetting and drying of concrete surfaces results in chloride migration to the steel and aggressive chloride attack.

Rust staining is visible proof that the steel is already corroding as a result of salt attack. The cause and extent need to be investigated.

Over time, carbon dioxide gas from the atmosphere can acidify the concrete surrounding the rebar causing corrosion to initiate.

The volume of steel corrosion products is 6 to 10 times the volume of the original reinforcement bar. This results in concrete cracking and spalling which can have serious health and safety implications.

Loch Street multi storey car park in Aberdeen was suffering damage to the steel reinforcement in the parking decks. CPT undertook a full suite of testing including half-cell potential testing and chloride samples to identify local corrosion hot spots resulting from de-icing salts deposition. An iterative approach was adopted by CPT with the testing so that once a hot spot was identified the area was thoroughly examined with smaller grids of half-cell potentials to establish the full extent of the corrosion activity. This enabled CPT to produce an accurate remediation concrete repair and corrosion protection design for the client.

Our “hybrid” DuoGuard product was used to protect three decks at Loch Street . With up to 50 years lifetime of protection DuoGuard uses a temporary power source in the first phase (for one week) to substantially boost the protection lifetime – it then reverts to galvanic mode for the rest of the treatment.

No power source is required after the initial seven day impressed current stage – the DuoGuard anode provides the power source galvanically making it completely self-contained. Also, no complex control systems are required and maintenance is negligible therefore whole life care costs are extremely low. The works were phased so the car park could be used throughout the restoration period.

The forty-year-old pool was demonstrating spalling and delamination due to corrosion of reinforcement in the pool walls. CPT carried out iterative testing including carbonation depth, chloride profiling and half-cell potential surveys the result of which indicated the pool walls and walkway soffits were suffering from a combination of chloride and carbonation induced corrosion.

Based on the results of the testing, CPT provided a bespoke design solution in 2014 which treated areas at the highest risk of further corrosion damage. A DuoGuard Hybrid anode system was designed to halt ongoing corrosion and prevent future damage. This involved the installation of over 1650 anodes divided into 40 individual anode zones spread across the pool undercroft.

All of these zones can be re-accessed and powered should conditions change in the future. The discrete nature of the anodes meant that concrete obscured by complex pipework could still be protected by the anode system. The two pools remained open throughout the works.

For more information on our services and products, or to arrange a free CPD seminar at your office, email martin@cp-tech.co.uk or call Martin Davison on 07782113395.